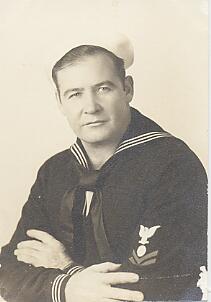 Edmund John ("Bud"/"Pop") Lawler was born in Portland, Maine, son of Daniel and Josephine (Reynolds) Lawler on January 16, 1906. He attended Portland schools. He was a Navy veteran of World War II, serving in the Pacific as an Electrician's Mate.

Bud was employed for 38 years by Burnham & Morrill Company as a truck driver, retiring in January of 1971. He was a member of the 25 Year Club at B&M.

He was a former Commander and selected life member of Veterans of Foreign Wars, Post 832, South Portland, Maine. He was also inducted into the Military Order of Cooties, there. He was instrumental in organizing the VFW Post 832 Junior Drum and Bugle Corps.

Bud was also a member of the American Legion, Stewart P. Morrill Post of South Portland; the Disabled American Veterans, Chapter 17; and the Knights of Columbus.

Attention: Crew and Family Members, if you have updated information on Edmund John Lawler for us, please let us know. We would also like crew pictures, personal anecdotes, etc.